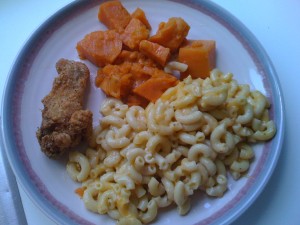 You’ve heard about Gussie’s Chicken & Waffles, set to open later this month in the former place owned by Powell’s Place, as reported by Eater SF. (That’s on Eddy near Fillmore, er, Fillmo’, near Yoshi’s and 1300 Fillmore.)

GrubGirl was in the right place at the right time and managed to catch a preview of Gussie’s serving up some food outside at an event at the Fillmore Plaza nearby. I ordered a custom sampler plate to try some homemade mac ‘n cheese, fresh sweet potatoes, and a nibble of their tasty fried chicken. Delicious is the verdict! The sides were cooked just right and not dripping in goopy buttery sauces.   Thumbs up to the friendly folks at Gussie’s booth that were chill with the off-menu on-the-fly request, cuz otherwise the portions would’ve been even bigger!

This entry was posted in Meals from $5-15 per main course, USA, Western Addition. Bookmark the permalink.