How to Make a Burger Bar Blackjack Burger

A new cookbook has come out from the chef behind our very own Fleur de Lys, who also owns the Burger Bar in the Mandalay Bay Casino in Las Vegas. The burgers at the Burger Bar aren’t made from your ordinary frozen flat beef patties, they’re gourmet burger concoctions. And now with Burger Bar: Build Your Own Ultimate Burgers, Hubert Keller shares some of those recipes with you. 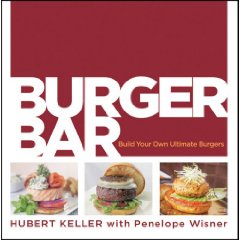 The key things I look for in a cookbook are:

I took the first recipe in his book, for the Black Jack Burger and was able to turn that into a hit at my friend Gina’s barbecue.

Herb’s recipe was extremely helpful, along with his general burger-cooking tips. His instructions allowed for flexibility, without judgement. (Sure, if I had a meat grinder and the time, I’d choose to grind my own beef too, but that’s just not realistic. He was kind about that.) Who knew that the fat helped keep a patty together, so I didn’t need to add the egg yolk or breadcrumbs that had made my former burgers taste just like grilled meatloaf!

I found his recommended 15% fat content ground beef at Trader Joe’s. Along with the Trader Joe’s Olive Tapenade, some Focaccia Buns (instead of the Ciabatta he recommended), and jack cheese, I was all set. Herb’s tips on shaping the burgers and flipping them on the grill made his babies stand out next to the wimpy flat disk-shaped patties that others had brought. The foodies in the audience definitely noticed the difference – and once off the grill, they were giving it a thumbs up. I’m not going to republish the recipe here, but the assembly is so easy that I’m going to be defaulting to the Black Jack Burger for a while. (Hint: Notice that I said nothing about blending anything into the ground meat?)

So there you have it, a practical, achievable hamburger recipe that was a popular hit and a change from the ordinary grilled patty. Anyone having a barbecue soon? We can experiment with some more recipes…. 🙂

This entry was posted in Recipes, USA. Bookmark the permalink.

1 Response to How to Make a Burger Bar Blackjack Burger