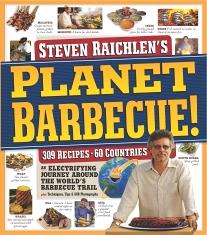 Who: Steven Raichlen, the guy on PBS that hosts those barbecue shows, and who knows more than a thing or two about grilling.

What: He’s got a comprehensive new cookbook out, Planet Barbecue! An Electrifying Journey Around the World’s Barbecue Trail

This is adapted from his Cumin-Grilled Chicken Breasts with Fiery Bolivian Salsa. I took a risk and omitted the salsa because I was too impatient to locate any locoto or rocoto chiles. Though the recipe does allow jalapenos as a substitute I was more concerned about the food tasting well on an indoor grill, so that’s what I focused on.

Prepare the chicken: Rinse the chicken breasts under cold running water. Blot them dry with paper towels. Season the chicken on both sides with the salt, pepper, and cumin. Drizzle the olive oil on both sides of the breasts, rubbing the oil and spices onto the meat with your fingertips. Let the breasts marinate in your fridge, covered, 30-60 minutes.

I serve this with some steamed veggies and bread on the side.

This was extremely easy to prepare and cook (you don’t even have to tenderize the meat!) and the flavors were great. Next time I make this I’ll assemble the salsa to see how the flavor of the tomatoes and chiles combine with the cumin and chicken. Thanks Steven!

This entry was posted in Budget. Bookmark the permalink.