This Friday, you get a chance to eat some wild baked Salmon at Ocean Beach, at about 6:30pm, when SalmonAid 2009 kicks off its awareness-building campaign. 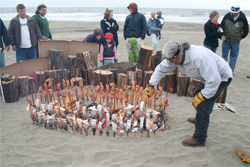 What do the festival organizers want you to be aware of?

If you have any other information (pro or con), and would like to educate the readers, please post in the comments. Otherwise, I’ll look for you at Ocean Beach this Friday!

This entry was posted in Meals from $5-15 per main course, News. Bookmark the permalink.